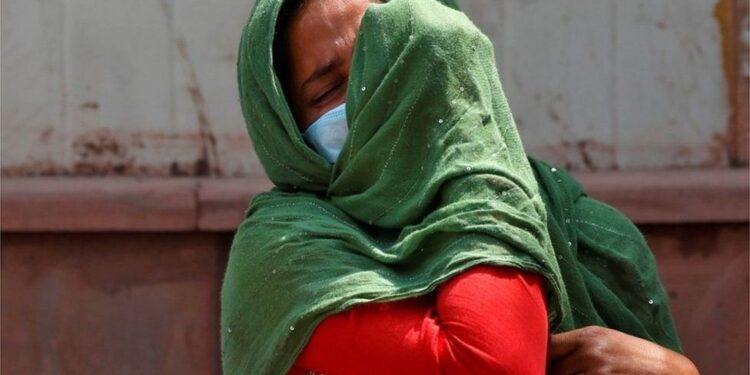 The current Covid-19 situation in India has devastated Doctors around India. People are screaming for help over social media has made people from around the globe raise their voices against the current government of India. India has been badly hit with the second wave of Covid-19 where an average of 350,000 to 400,000 cases is discovered every day along with 3,500 to 4,000 Covid-19 related deaths.

Currently, the city of Pune has witnessed the worst spread of the virus followed by New Delhi. People from India have taken it to Social-media platforms, asking people for medical help and doctors for online consultations. Many health-related groups have been created over the widely used platform Facebook, where people are helping each other in case of medical needs along with doctors suggesting medicines for various illnesses.

Indian’s have said that it’s become a habit to see an ambulance now and then and the alarming sound of Ambulance sirens can be heard everywhere, India is in crisis. People are begging for help as they can be seen lined up in front of hospitals, begging doctors and the hospital staff to give them medical attention. Almost all Intensive Care Unit’s (ICU’s) around India are equipped and hospitals have turned down their flags as they are not accepting any more patients.

Covid-19 cases and deaths are at a record high, recently, above 366,000 infections and 3,750 deaths were reported. Scientists and health experts are worried about how the infection is spreading so fast as the first wave in India only recorded an average of 85,000 to 90,000 cases per day at its max, but the current statistics have worried everyone. Scientists are requesting laboratories samples for testing purposes, if the virus has mutilated to a form that is even clingier and fast-spreading then the current B.1.1.7

B.1.1.7 was first tested in a few patients last year but has now spread to almost all Covid-19 patients. More tests were conducted in February and March 2021 for B.1.1.7 which revealed that 361 patients were carriers of the new B.1.1.7 out of 400 tests. At the end of March 2021, samples from around India revealed that 30% of patients were carriers of this newly mutilated form of Covid-19. There was also another mutation of the virus found in Indians, which was named B.1.617, now found in 60% of tests. Scientists are still figuring out whether B.1.617 is more contagious and fast-spreading than the clingy B.1.1.7.

A sigh of relief was taken around India when doctors revealed that the currently available Covid-19 vaccine called Covaxin was successfully fighting against these variants.

Will the cases increase?

The current ongoing research has revealed that if the situation in India remains the same, where a nationwide lockdown is not imposed, numbers can hit anywhere from 750,000 to 1 million cases per day along with 5,000 to 6,000 deaths. Researchers also stated that these numbers cannot be 100% accurate as the estimates were made while keeping the current situation of the Country in mind.

Health experts have suggested that a Nationwide lockdown should be imposed as soon as possible, ignoring the economy for a while. Prime Minister Narendra Modi currently seems more worried about elections and the country’s economy said, health experts.

Last year’s nationwide lockdown came with no prior notification, the notification was released just 4 hours before the lockdown was imposed. This didn’t give a chance to businessmen and workers to get their roads straightened up, which might have caused the economic slump. Health experts have also stated that the current Covid-19 situation is not just India’s problem, it’s a problem for the whole world as the neighboring country of Nepal has started to follow in India’s footsteps. Borders between the countries are busy with people going in and out of India as there is no immigration or visa required to travel between these two countries. Countries have currently banned all flights from India and Indians passengers are asked not to travel until the situation gets better.

Keeping India’s population in mind, India does not have enough hospitals and medical care centers, India was not prepared for the second wave. During the first wave when cases were significantly low, there was still a huge shortage of Hospital beds and medical equipment across India. Experts said that the Indian government has not learned a lesson from the first wave and is now facing drastic results during the second wave as the shortage continues and cases are increasing by every passing minute. There is also a shortage of Healthcare staff and Doctors around India. Shelter homes have been built in open environments such as Fields, Stadiums, and Shopping Malls, etc. But because there is a shortage of healthcare workers, the shelters remain closed. India has received a lot of medical help from major countries. Countries have sent ventilators, beds, oxygen cylinders, and a vast amount of other medical equipment.

States across India have imposed statewide lockdowns and night curfews, shutting down malls, restaurants, hotels, and other places where gatherings occurred. But experts have said that lockdowns in states and villages are not the solution to this problem. Sure people in that state may stay safe from catching the virus but different states have lockdowns and curfews at different times, as soon as the lockdown is lifted from a state, the number will start to surge again, which is why a nationwide lockdown is required.

India is known as one of the world’s biggest manufacturers of vaccines. But currently, India has only managed to vaccinate 2.5% of its 1.35b population. Vaccine stocks are short in India and the daily requirement cannot be met as cases are increasing every day.

The Prime Minister is under pressure and people are urging government officials to announce a 16 day nationwide lockdown.

Health experts from around the world have also suggested similarly that a nationwide lockdown is the only available solution for India.